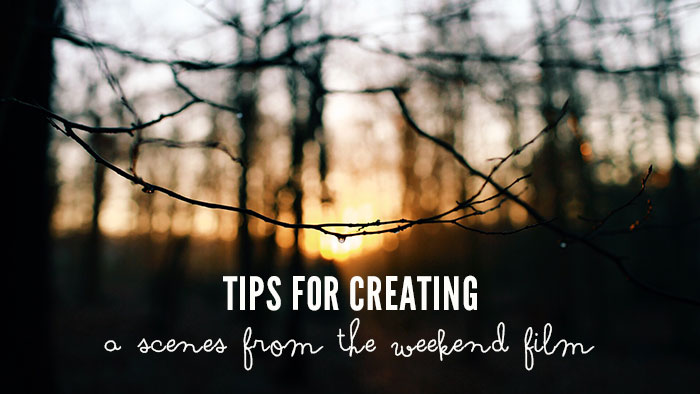 Posted at 07:00h in my films, my time capsules, scenes from the weekend by xanthe 0 Comments
Share

Back in Feb 2015. I created a 15 second film of Scenes From The Weekend to share on Instagram. It was a way using footage I’d gathered for a longer film I was making… (before Instagram allowed up to 60 seconds of video) I was interested in seeing if it was possible to make a mini story in just a few seconds…

It was… and then the bug of creating these little stories took hold and I carried on making them for a whole year and then went on to complete another year, as I love these little pockets of moments… so much.

It’s been my favourite personal project and never feels like a chore. I don’t even have to shoot everything I’ve done that weekend. It’s about picking the details or moments that represent that time.

Some weekends are busy… full of adventures and some are pretty lazy. But there’s always something to shoot… even if I’ve shot a sequence before, like making pancakes, I push myself to capture it in a different way somehow.

Scenes From The Weekend films are a simple project to get you into making films, as you don’t have to do anything special, just capture what’s already happening around you.

If you’re feeling inspired to create one, here are some…

Just start…dive in and start filming something. You don’t have to make a commitment to shoot every weekend. But once you’ve made one, you may do another… and another.

Generally you need between 5 to 20 clips depending on the length of them (and how long you’d like your film to be)… so don’t feel you have to document every part of your weekend. Remember you just need a few seconds of footage for each scene.

Preparation is key – Charge your batteries & clear your memory cards. Or if you’re using a mobile device, make sure there’s storage available… Then have your camera with you, so you’re ready to shoot whatever moment arises.

You can use any camera or even a variety of cameras. I mostly shoot on my DSLR, but I also add in additional clips shot on my iPhone or compact camera. Use whatever camera is with you. Don’t get caught up on having to have the best camera.

Seek out the details or moments that represent this particular weekend. Look for your unique story. I always like to include signs of the season that make me remember what time of year it was – autumn leaves, blossoming trees and golden summer light.

Shoot a variety of framing and compositions… for example wide shots and close ups. It will make your film more visually interesting. You could also include a time lapse or something in slow mo… I like to think of my films as a collage of clips, all pasted together as a moving memory.

Make time to edit. I put my films together on a Sunday evening, so they’re ready to share on Monday morning as part of my hashtag #minimondaymovies – the more times you edit and complete a film, the quicker you get.

If you’re looking to add music… my new favourite place to use is Soundstripe Music – feel free to use the code “xantheb” for 10% off your subscription.

When putting your edit together, look for the best bits of footage that tell the story of your weekend. Cut out anything that doesn’t fit or clips that are too similar to others. Fill your film with your “best of the best” bits.

But also remember it doesn’t have to be perfect or Oscar worthy! It’s about creating something that will be a wonderful memory to look back on. You won’t notice a little wobbly clip here and there, or the odd selection that’s out of focus – it’s about gathering your memories and locking them up tightly in a film to be viewed in years to come.

Have fun! And feel free to share your films with me by tagging @xantheb and adding the #minimondaymovies tag.

If you’d like more guidance and inspiration to create your own films like these and many more!

Check out my online course MAKE FILMS which is packed with tips, inspiration, project ideas and step by step guides to making a whole collection of films.

The next course starts March 14th – all the details are HERE

I hope you’ll join us!