My annual looking back post. A recap of my year, a chance to pull together all the films I made and re-live these moments again. Especially needed this year because so much of 2020 was spent in a fog, when each day felt the same and I was riding a rollercoaster of emotions (hello peri-menopause). I had to keep reminding myself that there were joyful moments sprinkled throughout each day… you just have to notice them. We were extremely fortunate to be able to stay home, to still work in some ways and be able to stay safe and healthy. There were many upheavals and cancelled plans, with that constant cloud of uncertainty hanging over us, but we made the best of a bad situation.

I’m so glad I pushed through the lack of motivation sometimes to make these videos, because I know for sure I would struggle to remember some of these moments, especially from early in the first lockdown.

I love looking back… Here are films from previous years –

January – Eased into the New Year, with this weekend film.

And edited together some Memory Postcards of 2019

And joined in with my Handmade Film Making course, by making a “week in the life” compilation.

This would be my last full month of “Mini Monday Movie” weekend films, as I’d already decided to stop doing this regular project in February, when I reached the 5 year anniversary.

February – Had the best night out doing the Silent disco again! it’s so mad looking at all the crowds in London.

Celebrated FIVE YEARS OF MINI MONDAY MOVIES! – I wrote here about what this project meant to me and how precious all these memories are. But also why I felt it was time to wrap it up and not document my weekend so consistently. Little did I know that the year ahead was about to change so much and my weekends would be spent at home pretty much. Thank goodness I took the pressure off myself to keep creating each week.

Wrapped up the month with a compilation of quiet moments during the 29 days. Spent most of February at home because the storms were so bad and my mood was low. If only I’d known, the rest of the year would be predominantly at home, I might have made the effort to go out a little more!

March – Started by creating a week of “Voiceover Vlogs” where I narrate extra thoughts about my day over footage. I was prepping for the latest session of Handmade Film Making online course and wanted to try a new idea for me.

Then the Covid-19 pandemic hit the UK and lockdown began. So I joined in with the course and created what would be my first week of staying home and documenting each day.

Also, my PLAY pack with the Filmm app launched. A collection of filters, effects, frames and transitions that are “film” inspired and full of colour and texture. 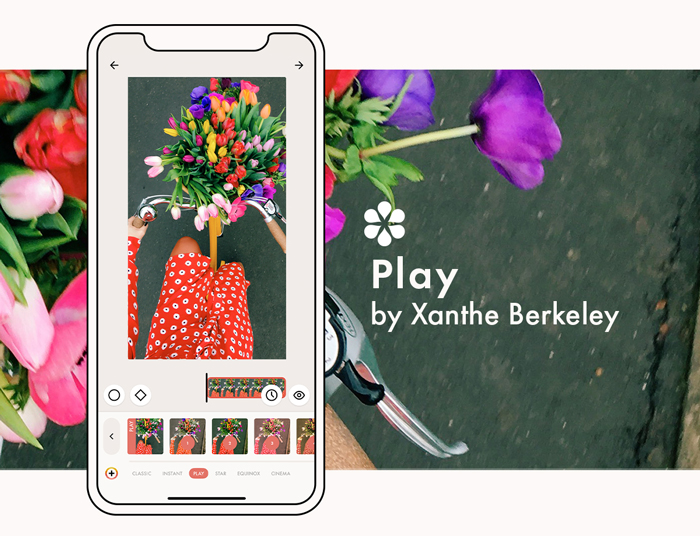 And I had A LOCKDOWN BIRTHDAY…

Did a fair amount of baking…

April – Made a weekend film because the sunshine was delightful!

Hosted another session of Handmade Film Making when most of the world was now experiencing the Coronavirus pandemic. Every day I spent hours being transported into people’s homes and lives through their stories, created using just their phone. It was so heartwarming… Read more about HANDMADE FILM MAKING DURING LOCKDOWN HERE.

I created a series of “Ten Things” films to push myself to document and tell a story in a different way for me.

Including this one, which shares my ten favourite shots to use when creating these videos.

Made this outfits video as part of my Tuesday Takeover on Zoella.

May – Took part in a colour

challenge and made mini stop motions – see all the colours HERE.

Did a round up of moments from recent times

And another week of daily films as part of the Handmade Film Making course. I wasn’t sure I could do it again, I’d been feeling like everyday was the same and creatively this is a challenge.

So instead of pushing myself to try and shoot each day differently. I stepped into the repetition and embraced it. Shot the same things, in a similar way, every day.

June – We escaped the house and lockdown for one day… it was bliss! So I made a film…

But then the whole month was a struggle… feeling tired, unmotivated and riding the emotional rollercoaster thanks to hormones and everything happening in the world. But I found I had documented a few snippets of joy, so I created my own Memory Postcards film.

July – As we reached 10o days of lockdown, restrictions eased here in the UK, so I gathered up the moments of our time together staying home and made this. A lot of these clips were used in the daily films from the previous months, but I wanted one film to tell the story of lockdown.

We continued to stay home most of the time, but did arrange a few trips where we knew we could still follow guidance and be with people who had also been self-isolating, so the risks were low.

So for the Handmade Film Making course in July, I approached my collection of films in a different way. Selecting days during the month, where I had more interesting stuff going on because I’d made so many of these DITL videos this year and my days are pretty much the same…

This meant I could include two camping trips and some days were my work life was a bit more exciting giving me a chance to shoot something outside of my usual routine.

So good to get back to photographing people and working outside of my home… Also, we went glamping… and it rained.

Went on our annual camp up with other families… and guess what? It rained!

Created some recipe stop motions for The White Company –

August – Camping again, this time just the two of us…

And a play with the “Ten Things” idea again.

September – A quick catch up of “Recently”…

And then into another week of the Handmade Film Making course. I continued creating the 15 second snippets with a voiceover, inspired by Tiktok and Reels from Instagram.

Highlight of the week! Doing a physically distanced silent disco on Hampstead Heath. So joyful!

Having shot so much this year in vertical, I wanted to make a weekend film in horizontal, just because. Nothing much happened, just the usual “stay home” activities!

Then a round up of the month… bike rides and taking Ky to uni.

October – Made a film about cups of tea because I was struggling with nothing interesting to shoot.

And made a selection of Reels of autumn bike rides…

Then another session of the Handmade Film Making course.

Made more stop motions for The White Company –

Put together a Memory Postcards of October…

November – Was all about STOP MOTION!

Set myself a “30 days of Stop Motion” challenge. With another lockdown happening, I thought there was no better time to jump in and focus on creativity… and doing something just for fun.

All the stop motions are HERE.

Picked up my DSLR for the first time in ages. I wanted to make something that will remind me of this quiet time during lockdown (again) and evoke the feelings of missing our eldest on his birthday. We did his traditional birthday firework celebration via FaceTime… thank goodness for technology.

December – Launched my new MAKE STOP MOTIONS course, which I was so happy about, as I’ve been trying to complete all year!

Hosted the final session of the Handmade Film Making course (I joined in 9 times this year!) and made a few daily films, which also included a look back at some memories from this year. Giving me a chance to reflect and muse on things… it was interesting to try this approach to telling a story.

And finally… the last film of 2020… was my festive offering… snippets of Christmas and New Year. A quiet time, safe and full of candles and being with the people I love (even if some were only virtually).

Wow, 2020 what a mixed bag… In my head I didn’t feel very productive, but looking at all these moments captured, films made and memories preserved. I actually created a lot! I’m so grateful. Most of the films were shot on my phone (and in vertical), I wish more was captured on my DSLR, but I know at the time, I didn’t have the energy or motivation to shoot that way. The ease of using just my phone meant I actually shot, edited and made stuff. As I often say, the memories are more important to me, rather than each film looking bright, colourful with a dreamy DOF.

Grateful for all these moments to look back on one day. As hard as 2020 was, there were also many gifts.

If you’d like to make 2021 the year you start making your own films – check out my online courses where I share everything you need to get started and inspiration to take you through the whole process and find the love of making films!