10 VIDEO IDEAS TO CREATE AT HOME 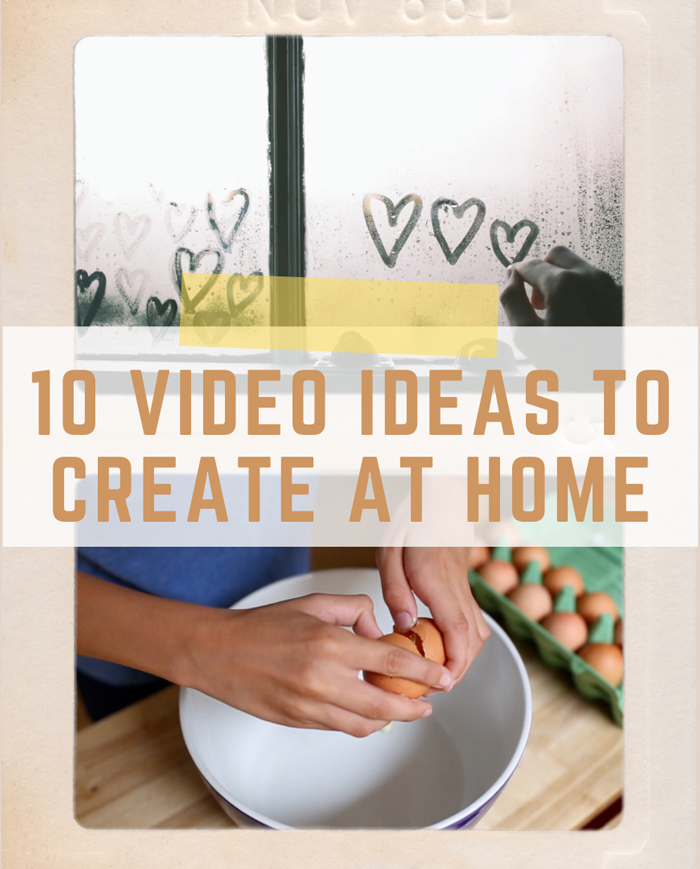 I wrote the first “Video Ideas To Create At Home” post back in March 2020, when the first lockdown was announced and we were faced with the potential of weeks at home.

I want to give some inspiration to shoot video and make some films of life at this time. I didn’t know at the time that over a year later, we’d still be in pretty much the same situation. I know I struggled at times in 2020 to keep creating… trying to find fresh angles to shoot and discover new stories to tell, while staying close to home.

So I thought I would update the post with the original ideas from films I’ve made over the years and some extra ideas, based on some of the videos I’ve created over the last 12 months.

I hope they inspire you to get creating…

All these film ideas can be made using your mobile phone or a camera if you prefer… and to keep the process easy, you could edit on your phone – here are my favourite apps to use. Don’t get caught up on needing a great camera, extra equipment or trying to make the “perfect” film. The idea with these projects is to have fun, be creative and document your life, as it is today.

GETTING STARTED WITH VIDEO

OR MY ONLINE COURSES.

So jump in and start creating and if you’ve got family members or children at home, you can make videos together!

A STORY OF ONE ROOM OR PLACE IN THE HOUSE

Focus on one part of your home and tell the story of it. One of my favourite films is about my kitchen table at the time. This was 8 years ago!.

I set up the camera to capture the activity around our table and put it together as a compilation. You could do this over the space of a day or a week. Place the camera on a tripod or a surface, hit record and let the action unfold. Then, if you like the speeding up action I’ve created here, most editing programs offer an option to speed up your footage.

Don’t forget to put yourself in the frame as well. You’re an important part of the story.

I think the same idea would work for a sofa, family room, the kitchen or anywhere that people gather in your home.

The theme idea for this film is to make a compilation of TEN THINGS from your day, or weekend, or your week, or even recent times. Compile them together and add a voice-over, so you can tell more of the story of each of your TEN THINGS.

(If you’ve got more/less than TEN THINGS to put your film, just use your own number… five, seven things or 15 things will work just as well!)

HOW TO OR DEMO FILM

Create a step by step demo for someone to follow. If you’re filming yourself, set up your tripod or the camera on a steady surface. Once you’ve chosen your framing, either from above or the side, just hit record and start your demo.

You could add text or titles to add more instructions or even a voiceover like below. If you’re feeling even more brave, you could talk directly to camera and pretend you’re on a tv show!

Don’t forget to include music to set the pace and tone of your film. If your film is a fun and quirky demo of, “how to tie a headscarf”, choose a tune that suits… or if you’re creating a serious ‘how-to’ film of, “how to knit a scarf”, you might set this to some calming music. Or if you’re painting stones, this might call for some upbeat music or calming tunes depending on your setting. You get the idea! This type of film can really be elevated by the music that accompanies it.

Filming family members, especially children talking to camera, is one of the best films to create!. I wish I’d made more when my kids were younger. But the films that I do have, are really precious to me, so if I can encourage you to create any of the films here, it would be to interview your children. You get a chance to hear their opinions, have a record of their voices and see facial expressions. Even the simplest questions can give such wonderful answers, especially because their answers change over the time.

You can make your film solely about the interview, you could add titles or photos, and/or you can intersperse other snippets of footage between the interview to show more of your subjects individuality, like you see in the film above.

Or, if you don’t have someone to interview, make the film about you… talk directly to camera and film yourself around the house doing different things. I did this when making my mini “Day In The Life” films, see below when I’m cooking.

We all have some archive footage sitting on our phones or on a hard drive somewhere. Give it a new lease of life by incorporating it with some new footage. Choose a theme to follow depending on the subject of your archive footage and shoot new clips that can enhance or tell more of the story.

The examples I’ve shared here are – reminiscing about my son returning from university and some of the time we spent together during lockdown. Plus, I look back at memorable trip, mixed in with the ordinary footage. I like how the clips from each setting are so different from each other but are still linked through the voiceover.

This is when everyone in the house gets involved by shooting their own footage and then you compile it into one collaboration film. Even children shoot some video because they have a different perspective of your home and life.

The film above was shot over a weekend and we all shot snippets throughout and then I edited it together. As the boys were older, we all used our phones but this could be shot on just one phone and you take it in turns to use it. The idea is that everyone sees the world slightly differently, so even the same scene can be interpreted in unique ways.

Some tips – Decide the time period for your film, is it a day, weekend or a week?. Make sure everyone is shooting in the same orientation – either horizontally or vertically, so all your footage is the same when editing.

This is a playful project because you can’t really plan what’s going to be captured but that’s also its charm.

Cooking videos are fun to make. So whatever you’re cooking, set up your camera and create a recipe film. You can approach your recipe by giving instructions or just have it as inspiration. You could also include titles with instructions or add a voice-over or talk to camera.

You could try stop motion, either for just one sequence, like introducing the ingredients or you could make the whole recipe as a stop motion. If you’d like to get started with stop motion, check out the free lesson here.

DAY IN THE LIFE

Put together a collection of video clips from your day, capturing as it is right now – in all it’s mess and glory. This project is one of favourites and something I encourage people to make regularly, as life is changing all the time.

This post is packed with lots of tips, practical preparations and inspiration to shoot your day. Take a look here.

And if you’re feeling really inspired to shoot your DITL and would like a little more guidance… my Handmade Film Making course is all about make daily films, on your phone for a week. Come and join us.

During May 2020, after months of lockdown, I thought I wasn’t going to be able to make anymore daily films, as it seemed like I’d exhausted all options. But I decided to embrace the repetition and document the same things, in the same way every day. This turned out to be a true reflection of life at the time.

So, you can intentionally shoot the same things each day, noticing any subtle differences in the subject you are shooting. Or can you try shooting the same thing, using different angles, shots or techniques each day.

DIP INTO YOUR ARCHIVES

If you feel like you have nothing new to shoot, go through any untouched footage and make time to edit it together, into something to enjoy. I always think compilation films like, my Memory Postcards are great ideas. You use one second clips to create a film full of memories. Check out this post for more inspiration.

Or use footage from films you’ve already completed and put together your favourite clips as reminders of adventures you’ve had or things you’re looking forward to do at some point. Creating this “Places I’d Rather Be” film was a great tonic, I was able to relive some of the memories of good times we’ve had and set intentions for things I’m looking forward to doing once we can start adventuring again.

Hope this has offered some inspiration to get started shooting videos and making films of life at home. All of the films I’ve shared here are so precious to me, they remind of things I might have forgotten.

But remember, with all of these ideas, sometimes it’s just about the journey not the destination. You don’t have to have a beautiful finished film, it could just be the process of shooting and editing that brings JOY. But if you do manage to create one of these films, you will have a memory of this time that will last forever.

Enjoy! Let me know how you get on and if you make any films from these ideas… Please share on Instagram using the hashtag #createvideoswithxanthe and tag me so I can see – @xantheb

And don’t forget to follow @createvideoswithxanthe for the Live Q&As and more inspiration.

If you’d like more guidance to start making your own films – check out my online courses where I share everything you need to get started and inspiration to take you through the whole process and find the love of making films!